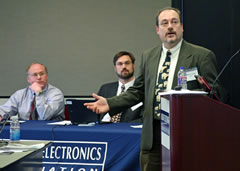 The forum was designed to address initial design and certification limitations of airborne systems, as well as installation nuances of stand-alone equipment in light aircraft and equipment interfaced to flight management systems in business aircraft.

“The AEA provided an excellent forum for dialogue that brought together regulators, manufacturers and installers in an informal setting,” said Tim Taylor, CEO of FreeFlight Systems. “This was important, and it was good to see the conversation regarding ADS-B Technology progressing from what it is into how we do it.”

The AEA and the FAA have been working together to revise and update the FAA’s ADS-B policy and the restrictions applied to initial installations of ADS-B aircraft equipment.

“This forum was created by the AEA, with complete support by the FAA, in response to a policy memo released by the agency last fall mandating that all ADS-B equipment be installed via an STC,” said Paula Derks, AEA president. “We felt this policy would effectively kill not only early implementation, but stifle the design and manufacture of new and innovative products expected to be brought to market to provide low-cost solutions for general aviation aircraft. We are pleased to have the agency listen to our concerns through this forum.”