Ron Hall of Duncan Aviation has received the 2011 AEA Lifetime Achievement Award, the highest honor bestowed on an AEA member. The recipient is selected each year from a list of nominees created and voted on by the AEA board of directors.

RENO, Nev., March 23, 2011 — Ron Hall was presented with the 2011 AEA Lifetime Achievement Award during the Opening Session of the 54th annual AEA Convention & Trade Show on March 23 at the Grand Sierra Resort in Reno, Nev. 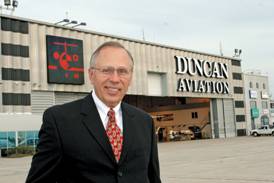 Hall grew up in the small town of Winfield, Kan., about 45 miles southeast of Wichita. It was there that Hall was introduced to the basics of electricity and electronics.

As a young teenager, Hall and several of his friends connected with a local ham radio group. They participated in field days, antenna raisings and studied for their general licenses. They also become cadets in the Civil Air Patrol.

Hall experienced his first flight at age 16, when the Air Force flew several cadets in an old, noisy cargo aircraft from Wichita to Salina, Kan., for a two-week summer camp.

After graduating from high school, Hall attended the local Junior College, and later, he began working toward an engineering degree at Wichita State University.

In January 1962, Hall enlisted in the United States Air Force. After basic training, Hall was assigned to Keesler Air Force Base in Biloxi, Miss. It was there that his fundamental electronics knowledge was upgraded to aircraft navigation repair.

Later in 1962, Hall was transferred to Lincoln, Neb., and the 307th A&E squadron. During the Cuban Missile Crisis, Lincoln had two B-47 squadrons, and his group of new trainees became top notch aircraft radio repairmen.

Following his release, Hall returned to Wichita and went to work for LearJet, where he met Bill Lear. Soon, Hall transferred to a new LearJet maintenance facility opening in Lincoln with a new avionics shop.

In 1968, American LearJet changed ownership and became what is known today as Duncan Aviation.

Hall’s career flourished from 1968 until his retirement in 2007 at Duncan Aviation.  He served stints as shop manager, installation shop manager and engineering supervisor, avionics sales and APU sales director.

Hall attended his first AEA convention in Kansas City in 1970, where he met AEA’s founder, Chuck Peacock. Attending the AEA convention became an annual event for Hall, and he forged new relationships with several AEA members throughout his career.

Duncan Aviation hosted several AEA Regional meetings, and Hall served on the AEA board of directors for 20 years. In 1985, he was named the recipient of the AEA Member of the Year Award.

Hall and his wife of 44 years, Phyllis, have three children: Allen, Douglas and Gretchen; along with nine grandchildren.

After 41 years in the aviation business, Hall retired four years ago and travels the world with his bride. Together, they have visited more than 30 countries.