HARTFORD, CONN., Sept. 22, 2011 — The 2011-12 edition of the Aircraft Electronics Association’s Pilot’s Guide to Avionics is being distributed by AEA staff at the Aircraft Owners and Pilots Association Aviation Summit, which takes place Sept. 22-24 in Hartford, Conn. The free Pilot’s Guide is available at the AEA’s booth No. 924. 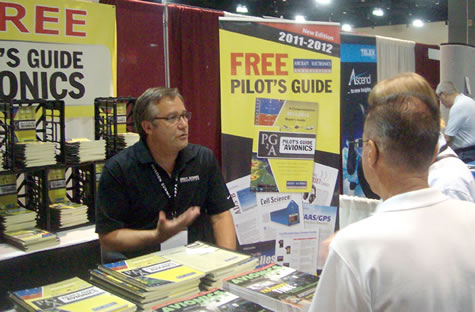 Ric Peri, AEA vice president of government and industry affairs, visits with guests at the AEA booth during the AOPA Aviation Summit in Hartford, Conn.

For the past nine years, the AEA has published the annual Pilot’s Guide to Avionics, a consumer’s directory containing buyer’s guides, educational articles and timely information about the avionics industry, its products and its people. The back portion of the Pilot’s Guide is a directory of AEA member certified repair stations and associate members.

Some of the articles featured in the 2011-12 Pilot’s Guide to Avionics include:

The AEA’s aim in publishing this annual guide is to help pilots make better avionics buying decisions and to assist them in locating repair stations certified by international regulatory authorities as capable of installing and maintaining these sophisticated pieces of equipment.

Thousands of Pilot’s Guides are distributed each year at no charge to all AEA members, National Association of Flight Instructors members, flying clubs throughout the U.S., and at the following events:

To request a Pilot’s Guide, visit www.aeapilotsguide.net. The website includes an avionics glossary, repair station directory by state and country, archives of past Pilot’s Guide articles and much more.