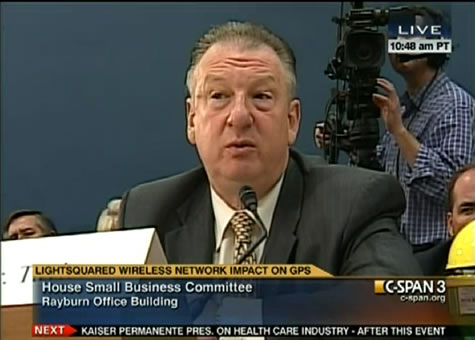 Tim Taylor, president and CEO of FreeFlight Systems, testified on Capitol Hill on behalf of the Aircraft Electronics Association on Wednesday, Oct. 12.

Taylor appeared before the U.S. House of Representatives Committee on Small Business hearing on "LightSquared, the Impact to Small Business GPS User." FreeFlight Systems, a manufacturer of GPS navigation management systems, is an AEA member.

Taylor explained to the Committee the absolute validations required for the integrity of aviation GPS systems, and words like "shouldn't" and "most of the time" simply are not used in the certification of aviation products.

According to LightSquared Executive Vice President Jeff Carlisle, who also testified at the hearing, LightSquared's "gentleman's agreement" should not affect GPS's signal, most of the time.

Following the hearing, when asked about LightSquared's commitment to only use the lower 10 MHZ, AEA Vice President of Government and Industry Affairs Ric Peri responded that this "gentleman's agreement" is only as good as the paper it isn't written on; last month the agreement was to use only the lower 5 MHz.

To watch C-SPAN3's coverage of the hearing in its entirety, click here.

To read the entire prepared statement from Taylor on behalf of the AEA, click here.