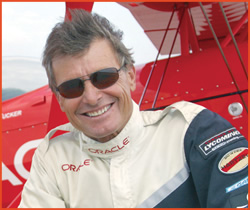 The opening session is sponsored by Universal Avionics Systems Corp. and will take place Thursday, March 13, at the Gaylord Opryland Resort & Convention Center in Nashville, Tenn., beginning at 8:30 a.m. CDT.

Now with more than 1,100 performances at more than 450 airshows, he has won numerous aerobatic competitions and received more than 18 prestigious awards, including induction into the National Aviation Hall of Fame in 2008.

Some of Tucker’s distinguished honors include the following: